Send me an email!
rockandorrollpodcast@gmail.com

NOW WE ARE TWENTY-ONE: ROCK AND/OR ROLL EPISODE 21 WITH DR. FRANK!

Now we are twenty-one, now we have to get things done. We found the perfect guest for this, our 21st episode! Frank Portman, a.k.a. Dr. Frank, was the brains behind classic pop punk band The Mr. T Experience for 20 years and more recently has authored of a pair of very popular young adult novels, King Dork and Andromeda Klein.

If you like what you hear check out Frank's books and/or music at the links below. 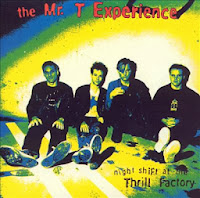 BJ and Fistful of Dave are back to share with you 30 carefully selected songs by some of the lesser-known purveyors of seventies rock at its heaviest.

What exactly does "heavy" mean? Who were the earliest, heaviest bands and how did their particular brand of rock and roll evolve over the course of the seventies, culminating in a new genre called "heavy metal" that exploded in the late seventies and into the eighties? On the next two episodes of the podcast BJ and his guests Martin Popoff (Part 1 only) and Fistful of Dave will attempt to answer these questions while sharing with you some of the very heaviest music of the seventies.

PODKISST AND/OR ROLL - THE GREAT LOST KISS ALBUM OF 1978

Every year between 1974 and 1985 KISS released at least one studio album except for, technically, 1978. That year saw the release of the four solo albums, one by each member of the band, but no actual KISS album. On this crossover event, which is an episode of both the PodKISSt and Rock and/or Roll, a quintet of obsessive KISS fans have the gall to rewrite KISStory by asking themselves WHAT IF??? What if, in 1978, instead of releasing the four solo albums, the four members of KISS had pooled their resources and made a truly great KISS album? Imagine that, between Love Gun and Dynasty...

LISTEN NOW to hear our choices and then...

Join in the fun and conduct the exercise yourself!

Which songs would be on your lost KISS album of 1978? Select your ten songs from the list below (following the rules listed above), put them in order (don't forget side one and side two) and post them at any of our Facebook pages:

ALL AMERICAN MAN
ROCKIN IN THE USA
LARGER THAN LIFE
ROCKET RIDE
ANY WAY YOU WANT IT
RIP IT OUT
SPEEDIN’ BACK TO MY BABY
SNOW BLIND
OZONE
WHAT’S ON YOUR MIND?
NEW YORK GROOVE
I’M IN NEED OF LOVE
WIPED OUT
FRACTURED MIRROR
RADIOACTIVE
BURNING UP WITH FEVER
SEE YOU TONITE
TUNNEL OF LOVE
TRUE CONFESSIONS
LIVING IN SIN
ALWAYS NEAR YOU/NOWHERE TO HIDE
MAN OF 1000 FACES
MR. MAKE BELIEVE
WHEN YOU WISH UPON A STAR
TONIGHT YOU BELONG TO ME
MOVE ON
AIN’T QUITE RIGHT
WOULDN’T YOU LIKE TO KNOW ME
TAKE ME AWAY (TOGETHER AS ONE)
IT’S ALRIGHT
HOLD ME TOUCH ME
LOVE IN CHAINS
GOODBYE
I’M GONNA LOVE YOU
YOU MATTER TO ME
TOSSIN AND TURNIN
DON’T YOU LET ME DOWN
THAT’S THE KIND OF SUGAR PAPA LIKES
EASY THING
ROCK ME, BABY
KISS THE GIRL GOODBYE
HOOKED ON ROCK N ROLL
I CAN’T STOP THE RAIN

At least 2 songs each by Paul and Gene.

No more than 3 songs by Ace.

At least 1 song sung by Peter with the OPTION of making it a song written by Paul or Ace to be sung by Peter (think "Mainline" or "Getaway").

In this alternate reality Alive II is all "live" and includes Take Me, Hooligan, etc. Double Platinum comes later. And KISS Meets The Phantom of the Park is actually good.

A co-production of PodKISSt
and ROCK AND/OR ROLL.

Badfinger were the first band signed by The Beatles when they launched their own record label Apple Records in 1968 and the band had several hits before the harsh reality of the corrupt record industry came crashing down on their hopes and dreams. The band's song "Baby Blue" was prominently featured in the finale of Breaking Bad and sold 5300 downloads that night on iTunes. On this episode BJ tells the tragic story of the band but also celebrates the amazing songwriters that they were, especially true genius Pete Ham.